Food you should never feed your dog. 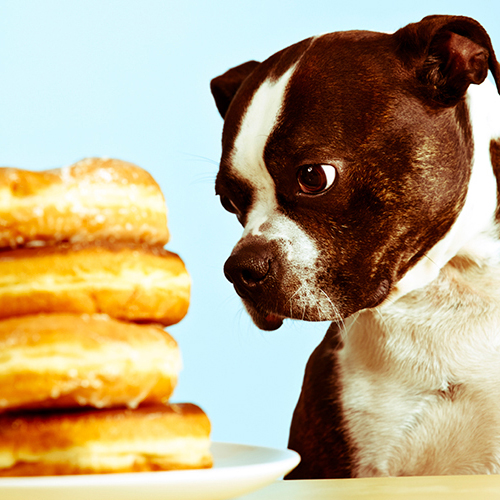 We all want our dogs to live long and healthy lives and it’s up to us to ensure that their diet consists of foods that will provide everything they need to thrive. It’s so tempting to slip them a little something under the table when we’re having a meal or add human foods to their doggy bowl since those foods are fine for us. What’s the harm in that? Plenty.

A dog’s anatomy is not like ours and what is harmless for humans can cause serious illness and even death in dogs. The following are some human edibles that should not end up in a canine tummy:

We humans know not to eat raw eggs due to the risk of salmonella poisoning and the same applies to our canine friends. According to the ASPCA, raw eggs can cause skin problem in dogs. Scramble those eggs and let your dog enjoy.

When consumed in large quantities, these foods can damage your pet’s blood cells as well as cause gastrointestinal problems. Besides, a dog’s breath doesn’t need anything to make it any fouler.

Most people know dogs shouldn’t eat chocolate but aren’t sure why. Chocolate contains an ingredient called theobromine, which can lead to vomiting, seizures and even death in dogs. It is most commonly found in dark chocolate but all varieties should be avoided.

Too much sugar in humans can lead to weight problems, poor dental health and diabetes — and the same is true for dogs. Sweet doggy treats can include a little honey or homemade applesauce rather than sugar or equally harmful chemical substitutes.

While very healthy for humans, the same cannot be said for dogs. Avocadoes contain an ingredient called persin, and if ingested can lead to canine death. If you grow them, keep your dog away as this ingredient is found in all parts of the plant.

A no brainer, right? Alcohol has the same effect on animals as it does on humans, but since a dog’s body is much smaller, it works much quicker. Depression, breathing problems, coma and even death are just a few of the possible side effects. Getting your dog tipsy is not a cute thing to do.

They may seem like a healthy food to feed your pet but they may actually lead to lethargy, vomiting and kidney failure. In some dogs, all it takes is just one grape and scientists have not yet figured out why this food can be so harmful. And since dogs tend to swallow food whole, choking can be a factor with grapes. Better to be safe than sorry and not allow your dog to eat them.

You don’t want to eat them and they shouldn’t be fed to your dog either. They can contain life threatening toxins called tremorgenic mycotoxins which can cause body tremors and convulsions in your dog.

We may need a cup to start the day but our canine buddies don’t. Coffee, like chocolate, contains caffeine which can cause vomiting and even death in extreme cases. A walk around the block will get your dog going in the morning.

Just a couple of these can lead to paralysis and heart failure. Peanuts or peanut butter are the safest nuts for dogs.

I don’t know why anyone would think this is a smart food to feed one’s dog but if ingested, the live yeast in a dog’s warm stomach will grow and cause the dough to expand. This can lead to decreased blood flow and difficulty breathing and if not treated quickly, can lead to death.

Dogs are all about food and gulping it down, often unchewed, as quickly as possible. While many a dog has undoubtedly ingested some of these foods without any ill effects, it’s simply not worth taking a chance with any of these potentially harmful foods.

Stick with the healthiest dog food you can find and may your pet live long and prosper.