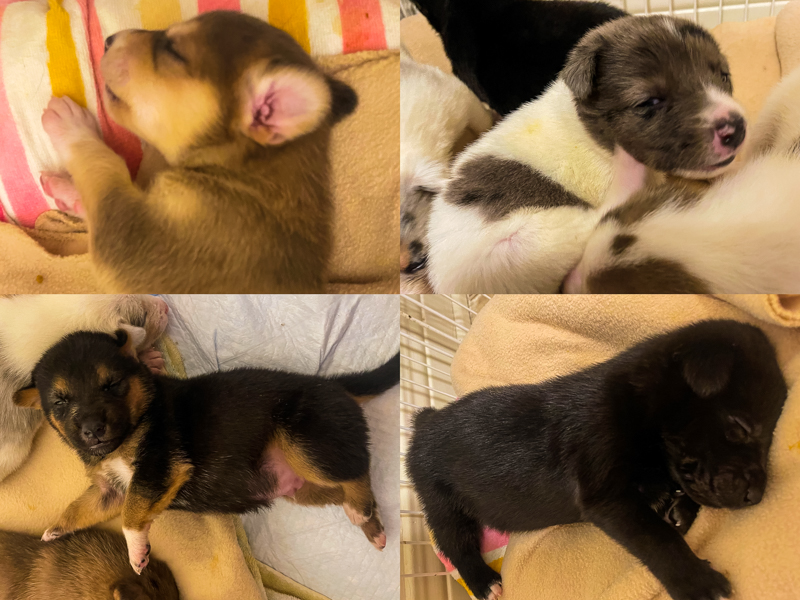 Animatch is not a foster-based rescue.  As all our followers know, the majority of our adoptees are housed at our Animatch Centre with a few exceptions made for dogs who need more one-on-one attention or training for specific behaviours.  There are two very special Volunteers – Carrie and Monica -- who have been fostering some of  the litters that arrive from Northern Communities.  For those of you who might think this is an easy task, we asked Carrie about her most recent foster experience.

After giving birth to puppies, Mama usually knows exactly what to do. She cleans her newborn babies and makes sure she’s always available whenever they need to eat. Puppies are blind and deaf when they’re born, so they’re completely dependent on their mother. Take Mom away, and their outlook becomes bleak.

Carrie is fostering two litters that she took under her wing when they were just a few days old and motherless.  We are happy to say that all have survived and are thriving.  One litter of 3 pups and the other of 7 pups.

Carrie said that when the first litter arrived from Whapmagoostui on March 23rd at just a few days old, they looked like newborn squirrels.  They were all struggling to stay warm (newborns cannot regulate their own body temperature) and one of the three was extremely weak – in fact, so weak she could not suck on the nipple of the baby bottle.  Having done this before, Carrie had a few tricks up her sleeve and finally the pup started to feed on her own.  Carrie was feeding the trio every two hours – yes, through the night too!  After a week or so it went to every three hours and then four.  It’s a delicate balancing act and overfeeding can be dangerous too.  Mama also gets the puppies to pee and poop by licking them; there is a limit to how much a foster Mom can do.  Carrie used a make-up pad dipped in water to simulate Mama’s tongue.  Thank goodness by the third or fourth week, that Mothering job was over.

By April 16th, Carrie was finally seeing her life as a surrogate Mom getting a little bit easier.  Maybe she’d get a few extra hours of sleep!  Not so fast!  Another litter who were just a few days old were flying in from Whapmagoosotui – this time there were 7 newborns.  And, it started all over again!

Bottle-feeding all 10 takes 1.5-2 hours.  Add to that the times it takes to make bottles for 10 puppies.  Animatch keeps the equivalent of Similac/Enfalac for puppies (which, by the way, is very expensive) so Carrie tries to make her own formula which is more time consuming when she has the chance.  Of course, Mama has not been around to clean her pups so that is part of the daily routine too.

Carrie spends time refereeing, as Mama would if she was around.  One of the boys likes to grab his little sister by the tail and drag her around – there’s one in every crowd.  This makes the puppy confused and she screams!  The litter of three Huskies learned to howl very early in the game.  Not so much fun at 5:00 a.m.  Some traits are learned some are just part of the breed.  There are lots of fun times too.  Watching them take their first steps, introducing them to toys, seeing them roughhouse and then fall asleep in a huddle.  All of it makes for happy memories.

The best situation for any puppy is to be with his Mama but second best is a Foster Mom and the Animatch Foster Moms put their heart and soul into taking care of their charges.  Carrie is the only Mom that these pups have known.

Regrets?  Absolutely none (well, maybe just the lack of sleep).  The bond that she has formed in just 9-10 weeks is inexplicable but Carrie knows that they will soon be moving on.  Watching them go home with their adopters and seeing them become an adored member of someone's family is the reward.

Because whatever you do – it’s better than nothing at all."